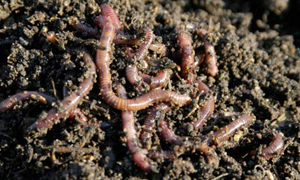 Compost worms are worms that are suitable for worm composting or vermicomposting/vermiculture as some people call it. Either way, it is the same idea of using worms to convert organic matter into other by-products. Such by-products are called worm castings are they are an excellent source of fertilizer for gardens and plants. There are three kinds of compost worms popularly used by the home farmers and garden enthusiast. They are the ‘red worms’ known as European Nightcrawlers (Eisenia hortensis) and the Red Wigglers (Eisenia foetida or Eisenia andrei). The third variety of compost worms is the ‘blue worms’, scientifically called ‘Perionyx excavatus’. Compost worms belong to the earthworm family, known as ‘Lumbricus terrestris’.

The Eisenia foetida is a species of compost worms that is commonly known as Red Wigglers, brandling or manure worms. This is because they can often be found in cow and horse manure. If you want to get started without buying any worms, you may want to dig through a pile of manure in the hope of finding some of them! The Red Wigglers is the most common species because they can suit a variety of conditions and weather temperature. Do note however that they are still very sensitive creatures and would need the right environment to live and thrive in.

The Eisenia hortensis, European Nightcrawlers, is the other red worm species suitable for vermiculture. They are darker in color and can grow to a bigger size than the Red Wigglers. Because of this, fish enthusiasts may like to rear these kinds of worms to feed their fishes or for their fishing trips, though this is a very expensive option! However, they do seem to have a lower reproduction rate therefore they should preferably be reared only by experienced vermicomposting enthusiast. Having the right knowledge will enable the European Nightcrawlers to breed and thrive in the worm bin environment.

The third breed of compost worms is the blue worms, known as Perionyx excavates. Blue worms are also known as Indian blue worms or Malaysian blue worms because they are found in such tropical countries in Asia, and thus are used in vermicomposting in these countries. They can also be found in tropical areas like South America. Compared to their European Nightcrawlers cousin, they are smaller in size. It is so named as blue worms because it has a tinge of blue over its red body. As they are found in tropical areas, they are very suited to keep in countries where the climate is warm. They are excellent breeders who can multiply easily under the right conditions. They are also very good worms for composting and are highly recommended for starters.

The life span of compost worms is about 1-2 years. However, they have been known to live up to 10 years. Every 2lbs (910g) of worms can eat about 1lb (450g) of food daily! This is about the amount of waste (not including cooked food waste) produced by an average family. They can actually eat up to their own body weight daily!

This site uses Akismet to reduce spam. Learn how your comment data is processed.

How To Start Composting